History of Image of Wisconsin

In early 1991 twenty-five independent Insurance Agencies in Wisconsin met to achieve a common goal of gaining better position with an insurance company. They felt that as a group they could leverage for a better insurance package to offer their clients and better market share for their own agency.

After many meetings and discussions by the founding members, R.D. Weber took the helm of the participating twenty-five agencies to form the group that is now known as the Insurance Marketing Group of Wisconsin, Inc. The participating members each contributed financially and received a share of stock in the corporation. To this day all IMAGE members own one share of stock in the corporation and each has the same voting power regardless of the size of their agencies. 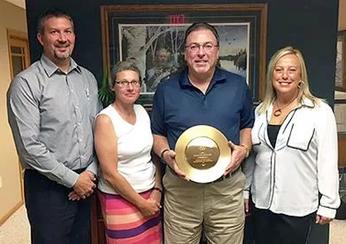 In August 2016, the Image of Wisconsin insurance agency of Saint Germain, WI, was once again a member of State Auto’s elite Inner Circle. At the presentation were, from left, State Auto’s Darren Dunn, agency associates Phyllis O’Brien and Jon Strom and State Auto’s Lori Taylor.

The idea of IMAGE continued to grow at such a rapid rate that it soon became apparent that a full time Director needed to be established. R.D. continued to act as director while still running his agency. Jim Holmes was appointed as Marketing Director for the IMAGE group in 1993. Jim took the reins and grew the group from the existing twenty-six members to thirty-two by selling the idea of IMAGE and steadily adding programs to their portfolio.

During the time Jim was the Marketing Director many programs were put in place, soon it became clear that IMAGE could easily support several “Specialty programs” (monoline companies and companies desiring specific classes of business), and several “all lines” company programs.

IMAGE continues to grow with new agencies and programs. The thirty-five partner Associate Member Companies that support the IMAGE philosophy paid out over One Million Dollars in contingencies to the IMAGE agents.

The Insurance Marketing Group of Wisconsin, Inc., IMAGE of Wisconsin, is a group of Independent Agencies working together to use its combined size and presence throughout Wisconsin, to develop and market insurance programs, and to improve its position with insurance carriers.

Growing a healthy independent insurance agency takes fortitude. You need a vision for the future, a plan to get there and resolve for the journey. IMAGE of Wisconsin will help strengthen your agency. We provide expertise and tools to help develop your operations, relationships with providers, and client services.

Get In Touch with us

To learn more about IMAGE of Wisconsin and all its benefits please contact: Jon Strom, Chief Operating Officer IMAGE of WISCONSIN